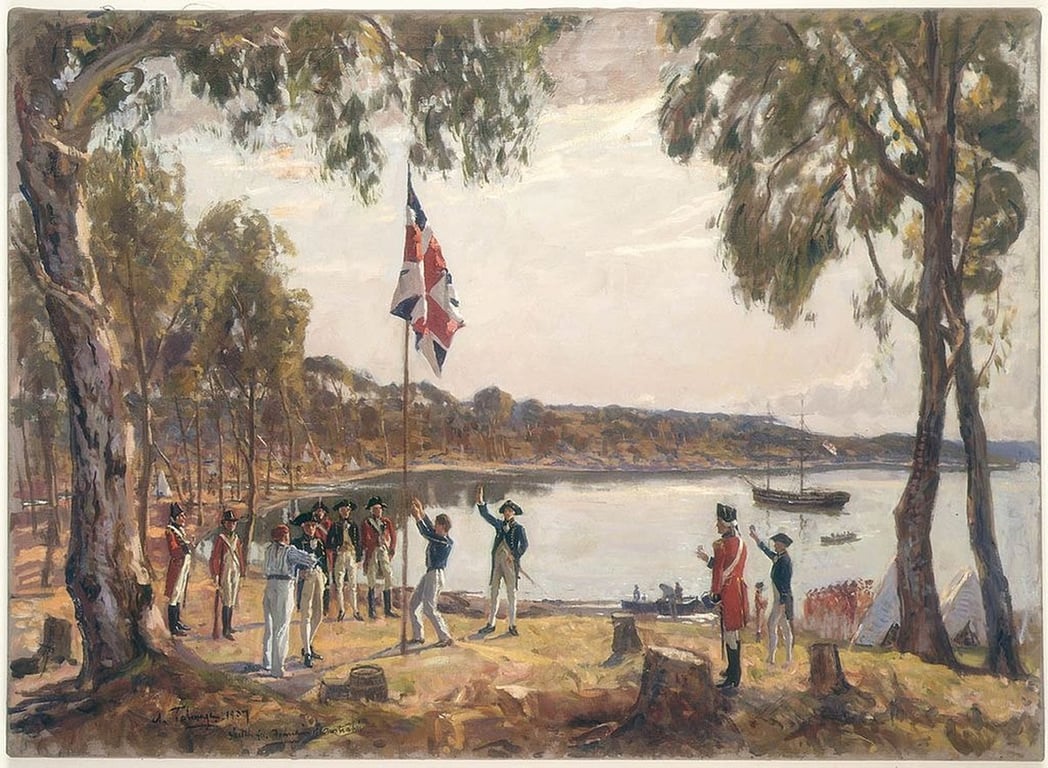 In the late 18th century, English Australians were made up of the exiled – people transported largely for petty crime or debt to what eventually became their ‘lucky country’. As ‘prisons’ go they were very fortunate. The consequences of their arrival for Australia’s aboriginal population was a different matter. One of the world’s most ancient continuous peoples – they did experience a form of imprisonment but that is far beyond the scope of this article which focuses on how modern Australia came to be.

English Australians began arriving as prisoners and soldiers in January 1788. They didn’t name the country, the origin of that – the Latin australis – lies in the fabled land described by Ptolemy in the 2nd century. They weren’t even the first Europeans. The Dutch made it here over a hundred years earlier, but – much like their Spanish and Portuguese peers who were beginning to explore North America – they lacked the technology to make little more than brief forays into a harsh climate and land judged too difficult for cultivation.

That all changed with Captain James Cook’s exploration of the ‘Great South Land‘, beginning with what became New South Wales. It was obvious to Cook from the start that this was prime farming land but old attitudes die hard and it was decided to establish a penal colony. Prisoners could no longer be sent to what was now the United States, so Australia made the perfect place to transport the occupants of the country’s bulging prisons.

The term convict can be loosely applied here, for the vast majority petty crime brought on by debt and poverty were the primary reasons for being shipped off. The South of England and London in particular were experiencing an acute crisis in petty crime, so if you are among the one in five Australians whose ancestors were ‘convicts’, they likely came from in-and-around London, or places like Devon and Cornwall.

The reason for that is rather simple. The rural economy began to die as the industrial revolution sucked Britain’s people into major cities. There were too many people chasing too few jobs which depressed wages, leading to desperate measures for survival. People were forced to steal or starve and with prison ships overwhelmed, deportation was the easiest solution.

Over 80 years, an estimated 160,000 people – mainly southern English and native Catholic Irish – were deported. Sydney, was followed by Hobart and Brisbane as the prime penal colonies. When their sentences were complete, many convicts headed to Melbourne or the free settler colony of South Australia. Perth was also founded as a free city, but it struggled for decades due to the difficulty of land cultivation. That only began to change in the 1850s when thousands of convicts were transported to help transform the settlement’s infrastructure.

Many others from across the world have come since, from the gold rushes which offered hope to those suffering from famine, discrimination or inescapable hardship, to modern day changes in the immigration system.

Australia’s defining feature is that it came to see itself as the lucky country, often because so few of its earliest old world occupants had much luck back home. Together a land was built that for all its successes is still stained by two hundred years of selective exclusion; something Australians will need to continue addressing, if the future is to be as kind as the past.