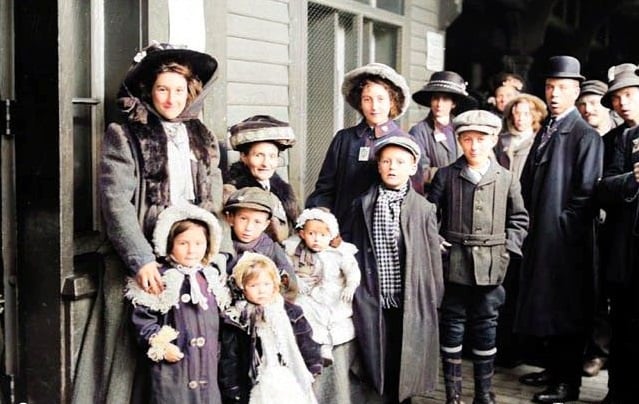 English Canadians were very much outsiders when they arrived not long after the French in the early 1600s. An Italian paid by King Henry VII of England did make the first European contact since the Vikings in the 11th century but the age of imperial expansion was well underway by the time the English made any impact. Portugal, Spain and France were miles ahead in the competitive resource grab and only a remarkable series of events made the cultures of Britain and Ireland replace the dominance of the French.

A crucial part of English success was the setting up of permanent settlements that were generally much bigger and initially further north than their rivals. Their gradual success was helped by the discovery of a faster route across the North Atlantic which helped them establish competitive trading posts up and down the Eastern seaboard of North America.

Cupers Cove in Newfoundland, now Cupids, was England’s first Canadian settlement in 1612 and only their second plantation in North America after Jamestown in Virginia.

As with all the early settlements there was disease and starvation, but Cupers Cove was significant because it helped fuel English expansion in the Americas.

While the Spanish and Portugese empires had previously laid claim to areas where the English settled, their attention was focused on warmer more immediately resource rich areas further south. Indeed, until 1604 no permanent European settlements had been further north than Florida.

Decades earlier, the French had explored far inland, reaching up the St Lawrence river to what eventually became Quebec City. The word “Kebec” is an Algonquin word meaning “where the river narrows.” The French created successful trading networks and developed strong alliances with Aboriginal Canadians. At this point there was little indication that the French settlers and natives could not continue to peacefully co-exist. Disease was not yet rampant perhaps because French settlements were relatively small and the distances travelled by their traders were huge. The mystery disappearance of the St. Lawrence Iroquoians near the first significant French settlement may have been an indication of the horrors to come from disease, but the truth is no-one knows.

Canada would likely still be French dominated today or part of the United States without a remarkable series of events. The French failed to see that despite their early successes, the smaller scale of their settlements eventually weakened their influence and failed to protect their interests.

But English speakers and their cultures dominated only after the creation of the United Kingdom in 1707, followed by the arrival of large numbers of loyalists kicked out of the new United States. The story of how Canada became British is a remarkable one. The ultimate twist in its tale is how the Scots newly allied with their former English enemies, defeated and then saved French Canada, leading to the creation of the country the world knows today. You can read more about that story here but the simple take home about Canada as a country is that its origins were much more pluralistic than its neighbour to the south; one that by necessity involved greater compromise and accommodation, though the native population’s experience is to this day vastly worse than suggested by the initial 200 years of first contact.