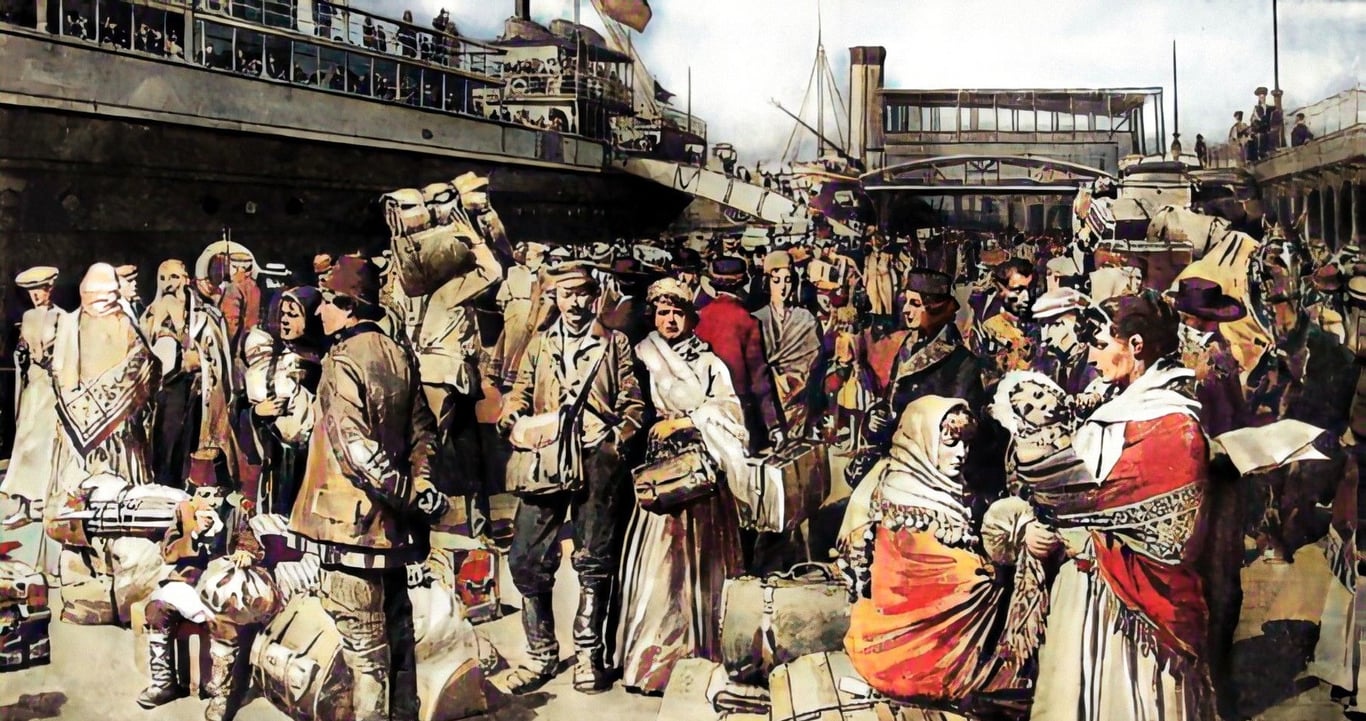 More than most the story of the native Irish, mainly from the counties that make up the modern Republic of Ireland, is a rags to riches tale of a nightmare start turned American dream. The Irish set the template for mass migration to the United States for others arriving without money and status.

The first thing to do when talking about the native Irish in America is to leave your assumptions at the door. Irish – at least in the American experience- is only Catholic and native Irish about a third of the time.

The majority of native Irish-Catholic immigrants arrived after 1845. But there were a small number during colonial times, too. Most of the early arrivals would have been very wealthy or well connected. Charles Carroll is a classic example, he immigrated in 1706. He was a wealthy lawyer and planter and his grandson was one of the signatories of the Declaration of Independence.

The vast majority of Irish Americans to this day have ancestors who only spent 2-3 generations at most in Ireland. It’s a fascinating tale, largely unknown to Americans in general and even many Irish-American families.

The short version is that the vast majority of people arriving from Ireland before the revolution were Scots-Irish. Most of their ancestors had lived in Ireland for no more than a century or two; their origins were overwhelmingly southwest Scotland. This group, vastly outnumbered the 10 to 20 thousand Irish Catholics in America at the time of the revolutionary war. So if your Irish ancestors were not Catholic, then you are likely of Scots-Irish heritage like Ronald Reagan rather than native Irish like Joe Biden.

Until the mid 1800s, when the lives of Catholic Irish began to fall apart, most people who lived in Ireland simply considered themselves one of many shades of Irish. Until the potato blight, Ireland had been a wealthy country – all be it with huge social and class divisions much like Britain and other parts of Europe. The big difference of course was 800 years of occupation and administration by the English and then British. The lack of native control proved deadly.

Ireland formally joined the Union with Britain in 1801. While the union did provide some benefits, Ireland – unlike Scotland – did not have centuries of home-grown self governance to build an equal foundation on. Instead it was run by a protestant Anglo-Irish elite who in cahoots with a wealthy native Irish landowning merchant class ran the country in their own ‘enlightened’ self interest.

When disaster struck due to mismanagement of the potato crop, the British State spectacularly failed to understand what was going on. As is so often the case, those who had most, blamed those who had least. In 1845, Ireland had close to nine million people – almost half the combined population of England, Scotland and Wales. Most were Catholic, most were poor. What was to happen over the next few years ensured by the turn of the century half of them were dead.

During the famine, discrimination and tensions multiplied between protestant settlers and native catholic Irish. Those tensions followed the half million native Irish who escaped starvation and the collapse of their communities by heading to America. America’s protestants with an Irish background started calling themselves ‘Scotch Irish’. It would be a century or more before Irish-American would once again simply mean those with ancestors born in Ireland.

The native Irish journey in America more often than not started right at the very bottom of the heap. They often scratched out a living within feet of where they stepped off the boat with empty pockets. They faced hostility and accusations of spreading disease as they crowded into cellars, attics and far worse places where cholera, typhus, tuberculosis, and mental illness were their greatest enemy.

Strength in numbers and a stubbornness borne from generations of being outsiders in their own land, meant Ireland’s refugees were a people with few friends among the already landed. But unlike back home they weren’t barred from organizing and taking part, so they slowly found their way into wealthier people’s homes and lives as maids, butlers, gardeners and drivers.

They also formed ruthless gangs and began to protect their growing turf, ‘illegal’ community organizers gradually became official ones. From there they joined fire brigades, police forces, unions and political organizations. Today they remain the backbone of America’s essential services and a huge part of the culture of the Democratic party.

The story of the native Irish in America is one of remarkable achievement for a people who refused to stay down. They had to walk an ugly path – often over others equally mistreated – to find their leading role in America’s story.