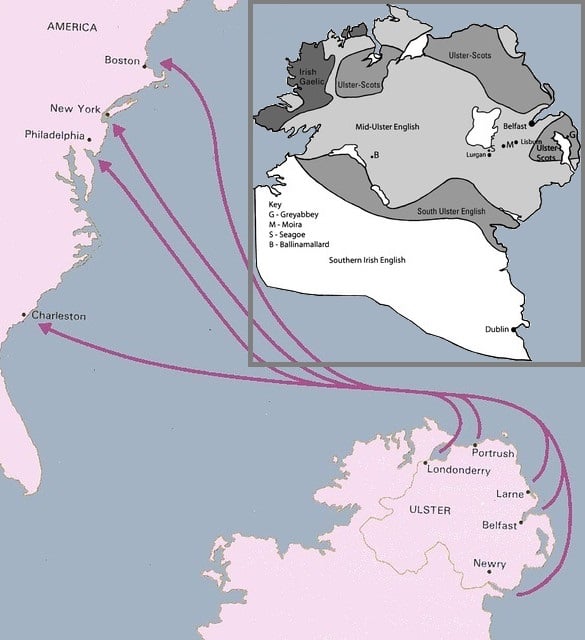 Scots Irish Americans are descendants of expert frontiersmen and women. For centuries they defended Scotland’s border with England as elite light cavalry, then when peace arrived they moved to protecting Scottish and English protestants in the north of Ireland from native catholic Irish attacks. They moved to America with a deep sense of betrayal after rents increased despite guarantees given by the new British State. If you are protestant and one of over 30 million Americans who have Irish ancestry, you likely descend from them.

An estimated 200,000  people of Scots-Irish background arrived in colonial America in the fifty years leading up to 1776. They would become the main military force of the Revolution and the primary reason the west was won.

The term Scots-Irish pops up for the first time in recorded history in 1573. But it was used for an entirely opposite group than those who became known the ‘Scotch Irish’ in America. Elizabeth I of England used it in reference to Gaelic-speaking Scottish Highlanders who crossed the Irish Sea and intermarried Irish Catholic natives of Ireland. These two groups had family and cultural links that regularly crisscrossed the Irish Sea way back into the mists of time. In later years their descendants would merge in the United States as Irish Catholic Americans.

Before the American Revolution many Protestants arriving from Ireland may have called themselves Irish on account of their place of birth, but that changed as Irish Catholics began to arrive in numbers in hope of a better life free of discrimination, poverty and starvation.

The Ulster Scots are descendants of Scottish Lowland families primarily from the south of Scotland. Like the Highlanders, they were famed for their blood ties and tight-knit clans. In Scotland and England families on both sides of the border were known as Border Reivers.  They were expert light cavalrymen who manned the frontier between Scotland and England for countless centuries. When they weren’t fighting each other off, they were fighting neighboring clans or even rival kin.  After meeting one reiver, Queen Elizabeth I of England is quoted as having said that “with ten thousand such men, James VI could shake any throne in Europe.”  When peace finally arrived in the borders after close to 8 centuries of near constant war, the reivers were sent to Ireland to protect protestant colonists against native Irish attacks. There they rapidly proved their worth and they and their families became known as the Ulster Scots or later on, Loyalists. Their descendants are the reason Northern Ireland remains part of the United Kingdom. But many left for America from the late 1600s to the mid 1700s with a deep sense of betrayal and abandonment. The British government failed to protect them from a massive increase in tenant farmer rents or provide adequate military support against an increasingly violent native rebellion that targeted their families.  Their traditional role followed them to the American colonies where they were the primary military strength of the patriot arm. In future years they were the main reason the West was won- manning the U.S. cavalry when in uniform and strong enough to withstand native attacks when not.  Some of their descendants still live in the Appalachians, but the greatest number started out in Pennsylvania and spread out to wherever there was a new frontier.

The origin of American nicknames

In Ireland the Scotch-Irish were supporters of the Dutch protestant William of Orange- King Billy as he was known by his supporters. William and his largely protestant Scottish and Ulster Scot army defeated the Catholic dominated army of the deposed King James made up largely of native Irish and Highland Scots. Their rural dwelling descendants in America are dubbed ‘hillbillies’ because of this connection.

In Scotland the Presbyterian Covenanters who moved en mass to America after their defeat, often wore red kerchiefs around their necks, hence the term redneck. And the English nickname for the Scots were ‘Jocks’, derived from the Scottish version of John, hence the ubiquitous description of their American descendants.

Read up further on Scottish Americans to discover the fascinating differences between the Scots Irish and the Lowland and Highland Scots who emigrated directly to America from Scotland. You’ll also discover the crucial role these groups played on both sides of the American Revolution.